To kick off their "All Prog Summer Series," J Hoskins and guest host Christopher Rutty delve into the multi-faceted careers of former Genesis axemen Steve Hackett and Anthony Phillips.


This "Branches of Genesis" show traces the sounds they continued to forge after they left the mother ship and cut their own unique musical paths.

>>> Listen to the show here <<<
Downloadable mp3 version now available, or subscribe to the show in iTunes 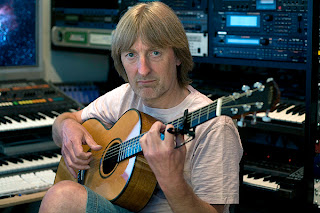 Part 1 of the show focuses on the dynamic and often similar solo paths Anthony Phillips and Steve Hackett followed after they each left Genesis, which was in 1970 for Phillips and 1977 for Hackett.

The discussion includes a selection of definitive tracks from Phillips' and Hackett's many albums up to the early 1990s and traces how through their distinctive electric and acoustic guitar styles and sensitivities continued and expanded the original Genesis progressive music spirt they played such an essential role in developing.

Part 2 will take their solo stories up to the present, when they finally connected and Phillips played on Hackett's latest album.

For details on all things Phillips and Hackett, be sure to visit their websites,

Three albums that if you haven’t heard yet, you need to go out and buy immediately!

The best written and best performed album this guy has done in the last twenty years and totally ignored by commercial radio. Please don’t make the same mistake.

One of the most vibrant, diverse and important modern progressive albums ever created. All from a band that was broken, and almost written off by their fans, before they even started recording it.

New singer Annette Olson has one of the strongest and most beautiful voices heard in rock. The only new album to enter my personal top-10 in the last five years. Absolutely stunning!

Almost prog in nature, and reshaping the template of heavy metal, the priest leaves this mortal coil with a bang. Unafraid to test the limits of their genre and choosing to go out in a blaze of renegade glory. Judas Priest closes the book on over three decades of hard-driving, pulse-racing and metal-fused mayhem with a concept album that defined everything they were and everything they hoped to be.

The Wall of Shame

Prog. at its best! Solid playing, far-reaching songs. These guys just keep getting better and better every time out.

What the Zep reunion might have sounded like if they were able to be coaxed back into the studio. Glenn Hughes locking horns with Joe Bonamassa and Jason Bonam laying down the backbeat. Classic Rock Heaven!

The ladies of A.O.R. return with a great batch of songs and energy to spare. Acoustic driven, but rock fuelled. I really didn’t think they had an album this good still in them. Boy was I wrong!

Chely Wright: “Lifted Off The Ground”

Sexy country siren comes out of the closet and drags with her a box full of honest hard-hitting tunes. I would hate to be the person “Damn Liar” was written for, ouch!

Their third album and I’m finally hearing what everyone else has been saying about their last two. A David Bowie inspired, alternative rock masterpiece which will remain on a multitude of critic’s top-100 lists long after the next millennium! And they’re Canadian, too. I repent.

Two ex Atomic Roosters and a former sideman from Roxy Music crank up the volume and let it loose. You’re going to want to have Kevlar on when you listen to this.